Yes, yes, this recipe has ‘Scotch’ in the title and it’s on a website called Yorkshire Grub. But, while this savoury treat’s origins are a bit murky, one thing that seems clear is that it’s unlikely to have actually originated in Scotland and Yorkshire is, in fact, a possible candidate. In any case, the idea for this vegetarian scotch egg started with our Vegetarian Stilton, Walnut and Celery Fritter Salad, which in turn started life at The Black Swan Hotel, Helmsley. And trust me, you don’t want to chase this recipe away. 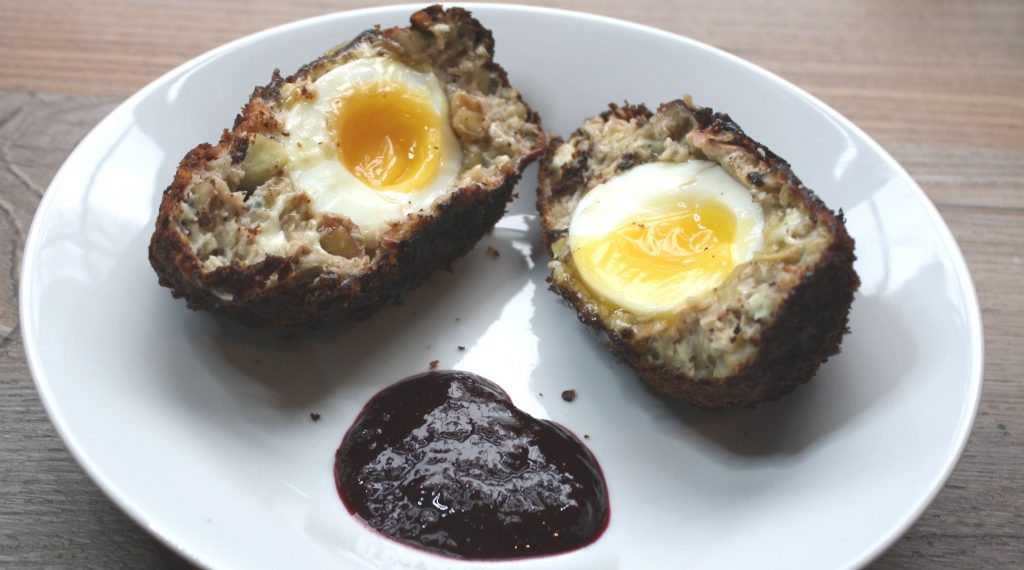 We served these at the Veg Out Christmas Fair at the weekend and, while the Beetroot Ketchup flew off the stall, the Vegetarian Scotch Egg was the sleeper hit. I’m not a vegetarian, but I do eat a lot of meat-free meals. I’m a firm believer that if you’re going to produce a vegetarian food it shouldn’t be a consolation prize for those who’ve given up meat. It should be a dish that a meat eater would be happy to choose over food that used to run or swim around. These Stilton, Walnut and Apple Scotch Eggs totally nail that.

Scotch eggs have had a bad time, but they’re on the way back. It first dawned on me that a scotch egg doesn’t have to be a pallid, depressing service station snack a few years ago when I had a chorizo-based version in The Reliance in Leeds. There is, of course, precisely nothing wrong with the idea of a fist of egg and meat, or other savoury coating. Done right, it’s a real treat and a perfect breakfast or brunch dish.

As for the history, there are several competing narratives. Fortnum & Mason claims to have invented it down at its London HQ back in the 18th century. Another theory draws on the scotch egg’s similarity to nargis kofta (which sound crazy-good and will definitely be getting cooked in Morley soon) to suggest it’s an Indian import. Yet another narrative suggests it came from North Africa via France to arrive in Britain back in the Elizabethan era.

My favourite comes via a chap called Robert Egan from Stevenage who claimed in correspondence with The Guardian that the egg originated in Whitby in the late 19th century, but originally had a coating of fish paste. “Their name in those days was ‘Scotties,’ allegedly because they were made at an eatery by the name of William J Scott & Sons close to the seafront. Hence, over a period of time, the term Scotch eggs was adopted. This was thought to be because the major foodstores who started selling the delicacy were unhappy with the name and adopted a more formal approach to marketing,” he writes.

It sounds good, doesn’t it? Unfortunately he cites Culinary Delights of Yorkshire by Peter Bone, which might not actually exist.

Furthermore, The Telegraph‘s Leah Hislop claims that the first printed reference to the Scotch Egg came in 1809 (though she doesn’t say where) suggesting that the dish pre-dates Mr Egan’s claimed late Victorian origins.

What we can say definitively, however, is that the Stilton, Walnut and Apple Scotch Egg originates in Yorkshire, because I invented it here. (Don’t worry, I won’t make a habit of using that line to justify dishes appearing on Yorkshire Grub). I’d definitely recommend experimenting with your own vegetarian or meat-based scotch egg recipes. Once you get past the off-putting-for-many notion of deep frying something, there’s all sorts you can do with it.

Print Recipe
Vegetarian Scotch Egg with Stilton, Walnut and Apple
A delicious vegetarian scotch egg that might just be better than its meat-based cousin. 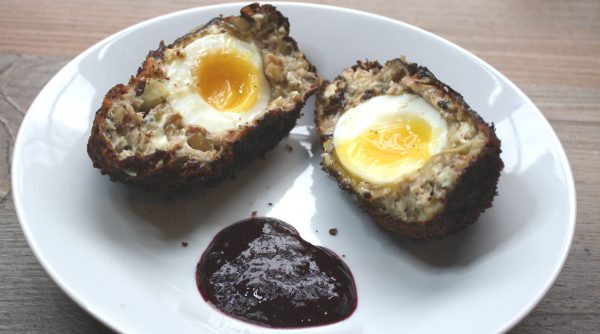