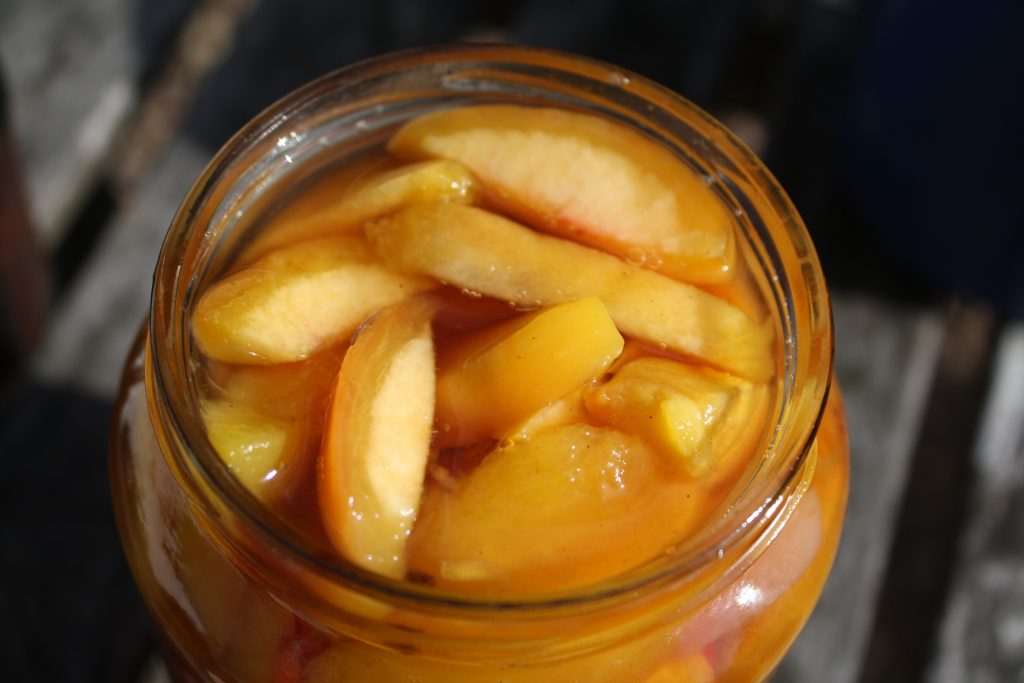 September’s on its way out and we’re edging into the back-end of peach season, which makes it the perfect time to preserve some for the winter. The best of the season runs from July through September, but October will have a bit of a peach hangover. There’s still time!

The peach is, as is much of our produce, not a true native fruit. It started life in China, where it’s thought to have been cultivated as far back as 2000BC. From there, the peach gradually spread through Persia and made it to Greece by 300BC. Fast forward nearly two millennia and we had them here in Britain by the 17th century, but they were rare and pricey until the 20th century. Perhaps that luxury good status explains why Hannah Glasse’s 1747 recipe (on which mine is based) from her (brilliantly-titled) book The Art of Cookery, Made Plain and Easy: Which Far Exceeds Any Thing of the Kind Yet Published involves dousing them in brandy.

It’s an indulgent twist, but it makes these peaches a nice dish to bust out with some thick cream at zero moments’ notice. If they were just from a tin, peaches with a splash of cream would be a pretty everyday pudding. Because you preserved them yourself and added brandy into the mix, it’s fancy.

That said – if you have some posh brandy lying around that’s great, but I just used some low-end stuff bought specifically for cooking. I know we’re all supposed to get the best ingredients we can afford and all that, but at the end of the day you’re going to be diluting it with syrup.

This is one of those dishes where you can take a little more time with the presentation if you want. You can blanch the peaches and remove the skins if you like. If you need to chop the peaches to get them into the jar (as I did), you can make the slices nice and uniform like their tinned cousins (if you have a jar big enough to keep them whole you should, though – they’ll look great!). But, for me, these additional steps are the difference between this being an easy recipe I do all the time and it being a faff that I can’t be arsed with.

Print Recipe
Brandy Peaches
A super simple, summery dish that hordes a bit of sunshine in the jar for the long winter months.

If you have a jar big enough to keep the peaches whole, they'll look amazing. You may need to increase the quantities of syrup and brandy, however. Keep the ratio to about two parts syrup, one part brandy.