It’s taken a couple of months, but with these oatcakes we’ve finally got to a recipe that I can use as running fuel without lying to myself. In essence oatcakes are a slightly-leavened bread that you can cook in a pan without a quarter of the effort that goes into baking proper bread.

Much as I’d like to claim oatcakes as a food of purely Yorkshire provenance, they were made across the north. The cooler climate up here meant oats were grown in favour of wheat, which wouldn’t take as well, and oatcakes were one of the results. Lancashire, Cumbria and other regions across the top of Britain have their own variations. Depending on who you ask, they were also called haverbread, havercake, tharve-cakes, clapbread and (my favourite) riddle-cakes.

Joan Poulson in Old Yorkshire Recipes (1974) quotes “a man writing about Linton in Wharfedale” back in 1805 as telling us, “They all grew oats, which formed the principle article of their subsistence; the kiln in which the grain was parched previous to its being ground belonged to the township at large, and when in use was a sort of village coffee-house where the politics of the place and the day were discussed.

“Of oatmeal their bread was invariably made and most of the puddings; and this, mixed with milk or water when milk was scarce, supplied them with breakfast and supper.”

The oatcakes would originally have been baked on a stone or iron backstone (a heated stone typically used for baking unleavened cakes, or its iron replacement). Poulson writes that the mudstone that the stone backstones were made of could only be found in certain places. There are records dating back to the 15th century of the stones being made, with the raw material being hand quarried then immediately placed in a stream so that it wouldn’t dry out and break up. It would later be split into one-inch slabs, then one side would be dressed and it would be put in a fire to harden.

There are variations to the oatcake method, and the finished product could be similarly varied. The Scottish version, for instance, would leave its bakers with big thick oatcakes while the version we’re going for is quicker, easier and produces a thin, floppy cake that feels a bit like a heavy pikelet.

Oatcakes are great with bacon, sausage or baked beans, but you could also cover them in jam or (like they did in the olden days) treacle. You could even use them as a flatbread if you like.

PS: Fun yeast fact that I uncovered while testing this recipe – the reason fast-acting yeast comes in weird seven gram measures is that it has the same effect as 30 grams of regular yeast, aka one ounce. Yes, that’s what a fun yeast fact looks like.

Print Recipe
Proper Yorkshire Oatcakes
Oatcakes are a slightly-leavened bread that you can cook in a pan without a quarter of the effort that goes into baking proper bread. 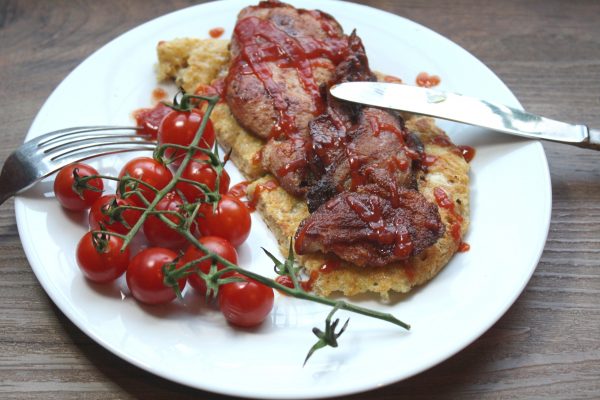