“It is a great pity more raised pies are not made. They are not so difficult as they sound, they keep well, and are substantial and wholesome,” writes Dorothy Hartley in Food in England. She does, I must say, make me feel a bit bad that we’re inverting the method for this pork pie with black pudding. 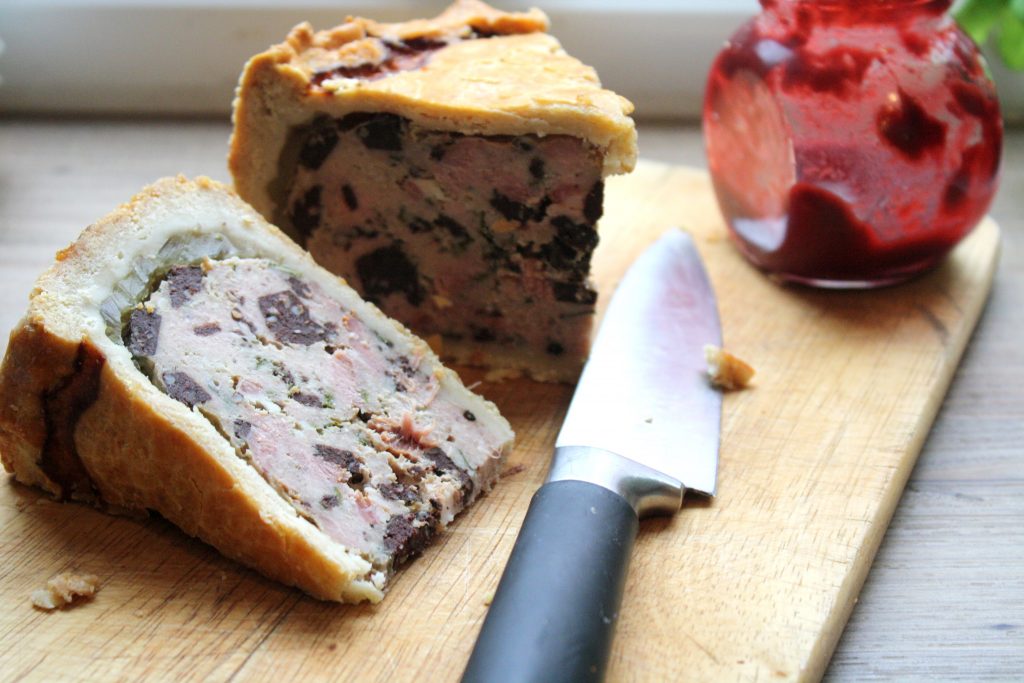 Still, the outcome is more or less the same and I’m sure Ms Hartley would agree that we’re sticking to the spirit of the pie, if not the exact details.

For several weeks (as of publication) butchers across Yorkshire have been putting out signs encouraging us to order our stand pies in time for Christmas. The pies are thoroughly embedded in our Christmas food traditions. I presume the same is true elsewhere, at least in the North, but the only place I’ve ever spent Christmas other than Yorkshire is Canada. It’s a pretty Northern sort of a country, but they didn’t seem that interested there.

The name ‘stand’ or ‘raised’ pie comes from the method of making quite a stiff hot water pastry and working it upwards into a pie case, often round a specially-fashioned cylindrical dolly, rather than lining a pie dish with it.

Melton Mowbray in Leicestershire is widely thought of as the home of the pork pie. Its particular brand of pie rose to prominence in the late 18th century when it was ‘discovered’ by fox hunters. According to Yorkshire Food Finder, however, the first recorded mention of a pork pie pre-dates the rise of the Melton Mowbray by a good few hundred years. The site points to a recipe from the court of King Richard II in 1390.

Once upon a time the pork pie was primarily a way of preserving meat and making it portable for outdoor workers. The meat filling would be coated in clarified butter rather than jelly in order to keep air away from it. The pastry used to serve largely as edible tupperware, and would often be discarded.

While Melton Mowbray has its claim on the pork pie, Yorkshire has the Pork Pie Appreciation Society. Meeting in the Old Bridge Inn over in Ripponden (which claims to be Yorkshire’s oldest hostelry and dates back at least to 1307), the society was born of a health club (naturally) in 1982. It now meets regularly to discuss the merits of different pork pies and holds an annual competition to decide who produces the best pie in the country.

“Only in Yorkshire, it seems, can a pork pie be properly appreciated. A baked box of pulverized pig body parts is not something to be scoffed at,” says the society’s website.

(Currently it also seems that only in Yorkshire can the finest pork pies in Britain be made. The 2016 results are at the bottom of the post, so you can see for yourself. Fun literary fact: the first ever second place winner, back in 1992, was Harry Potter. He was from Wombwell, Barnsley.)

As Ms Hartley notes, alternative raised pie fillings include veal and ham, mutton and gooseberries. I’ve added some black pudding into the mix for the recipe below, but there are all sorts of other other extras like cheese, chorizo and chutney that you could throw in.

Recipe notes: as I mentioned earlier, we’re actually lining a cake tin rather than raising the pie in the traditional way, but the outcome’s the same. The pastry shouldn’t stick, so don’t worry about that. A lot of recipes only have lard in the pastry, but adding in a bit of butter gives this pie a nice hint of dairy. We’re also taking Paul Hollywood’s advice and adding a bit of strong flour into the mix to help the pastry hold together.

Below are 2016’s Pork Pie Appreciation Society competition results. Let me know below or through Twitter or Facebook if you’ve tried any of their selections yourself. I can certainly vouch for Wilson’s!

Print Recipe
Pork Pie with Black Pudding
Making your own pork pie is a super satisfying way of getting ready for Christmas, or for absolutely any other time of the year. 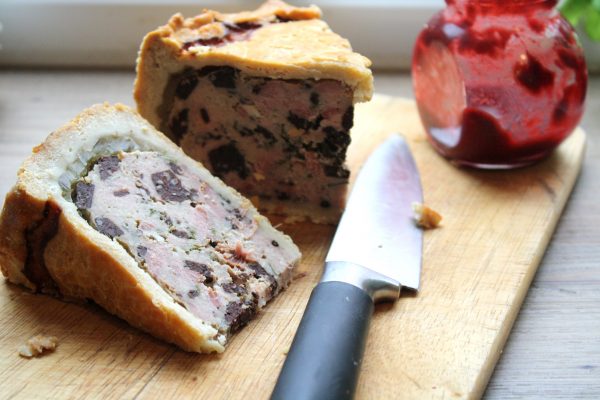