Meat and Potato Pie is a hearty Northern classic. If you’re cooking a meat and potato pie you’re looking to fill your belly, so we’re going all in here with a big thick suet crust.

We need to talk about pie, though. I know that there are some cooks and eaters who are very militant about what constitutes a pie, and for something to qualify it needs to have a pastry bottom. And, you know, I sympathise. 95 per cent of the time I’d rather have a bottom on my pie. Ideally, I’d like to be able to pick up my pie (or slice of pie) and eat it with my hands when it’s cold.

My great grandma (on my dad’s side) used to make this crust. She was, I’m afraid, from Lancashire. They don’t get the monopoly on suet pie crusts, though. By going with suet, you get a lovely steamed, dumpling-y underside to the lid, with a brilliant golden crust on top.

You don’t need to serve a meat and potato pie with much. You’ve got your meat and potatoes right there in the pie, so some steamed or boiled veg will round out your plate nicely.

Print Recipe
Meat and Potato Pie
If you're cooking a meat and potato pie you're looking to fill your belly, so we're going all in here with a big thick suet crust. 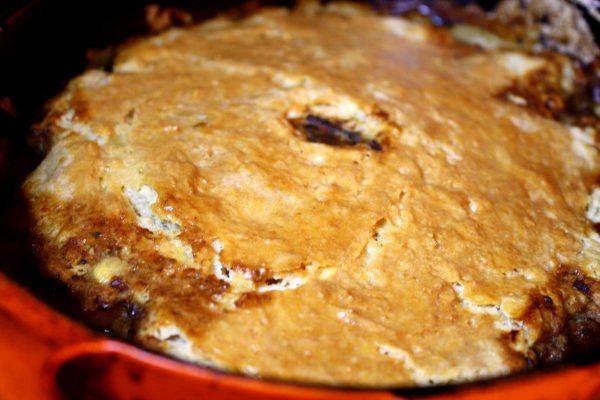