Knaresborough is, in my experience, about as nice a place to spend a day hung over with your mates as you’ll find. It’s dominated by the River Nidd and the lovely old buildings running along it. It appeared in the Domesday Book as Chenaresburg, meaning ‘Cenheard’s fortress’ and in the 16th century was home to Mother Shipton, a soothsayer born in a cave (that you can still have a poke around today). Neither of these facts, as far as I know, has anything to do with this pie that hails from there though, soooo…

Knaresborough Picnic Pie is one of those dishes that can be as elaborate or as simple as you want it to be. It doesn’t take any more culinary skill to get the balance of ingredients right than a ham sandwich, and I really would encourage you to tinker with it. The original recipe I came across (in Joan Poulson’s Old Yorkshire Recipes, 1974) simply calls for layers of boiled ham and egg baked into a pie. I’ve included cheese in the recipe below because it’s just such an easy win, as well as a glaze and a quick roast for the ham to add an extra layer of flavour. I also really like the addition of black pudding.

But, honestly, if you’re short on time then straight-up boiled ham and egg will still give you a tasty pie. The first time I tried it I made an all-butter pastry, but it was a bit crumbly so I’ve gone for a less delicate half-and-half with lard for the recipe below.

It’s a great summer pie and, as the name suggests, it’s easily transportable. I took some on our annual lads and dads hiking weekend and me, the old man and my brother were treated to plenty of envious looks as everyone else tucked into their pallid, supermarket-bought pork pies. So, yup, make this pie and be the envy of your dad’s mates.

Or, if you’re eating it at an actual table, serve it with a salad. This tomato chutney goes perfectly with it.

Print Recipe
Knaresborough Picnic Pie
A simple ham, egg and cheese pie that can be tinkered with to your heart's desire. 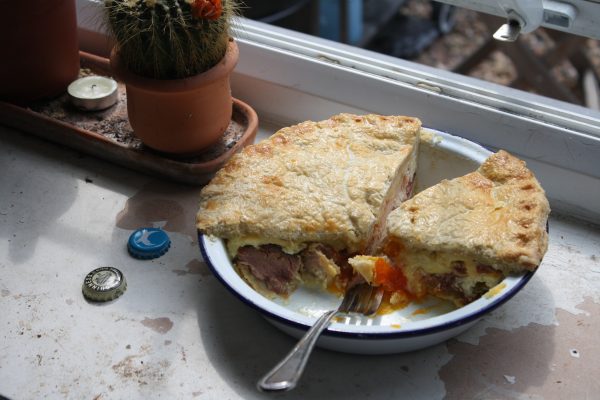 Ingredients
For the filling:
For the pastry:
Instructions
Share this Recipe