There’s no getting away from it. There are leaves all over the ground and many of them are brown. It’s definitely autumn. And, while it’s getting dark at 6pm and there are millions of cubic metres of drizzle in the air, everybody feels better if we focus on the fact that you can wear a jumper and scarf without much danger of actually getting cold. Plus, the air does smell kind of great and it is legitimately a good time to go for walks in the woods. So, in that spirit, nothing makes autumn seem lovely like a pastry-based dish called Autumn Elevenses*.

This is about as simple as a pasty can be. Pastry, beef, potato, onion, tomato. Job’s a good ‘un. As with so many of the pies and pasties set to make an appearance on Yorkshire Grub (and with this Knareborough Picnic Pie, which is already waiting for you) feel free to add in any extras you have to hand. Some rosemary or thyme would be a great addition to the meat and veg mix, for example, and there are very few things that don’t benefit from a little added cheese.

But, the beauty of this recipe is that it’s great as it is and will take a minimum of time and effort (possibly using ingredients you already have). The pasties aren’t massive, so you could definitely be forgiven for eating them as a cheeky snack for, as the title suggests, elevenses. Maybe while you’re walking in the woods. They also work well with some salad for a lunch or light supper. Think about dipping them in some Blackberry Ketchup.

A quick note on pastry – if you fancy making your own, great. I’d recommend 125g flour, 50g butter and 50g lard, plus a bit of salt. But, frankly, there’s a bit of snobbery in food writing about buying pastry. For many of us home cooks shop-bought more than up to the task a lot of the time, it’s inexpensive and it cuts a lot of faff, particularly if you’re after puff pastry (my mum says she made puff pastry once in her life and vowed never to do it again, and she knows what she’s on about). More importantly, the ease of rolling out shop-bought pastry instead of making it from scratch might be the difference between bashing out a simple recipe like this between other jobs and simply deciding you can’t be arsed. We’re all busy and this isn’t a slow food sort of a dish. Ignore those hoighty foodie voices in your head, embrace the packet pastry…

*(Yes, it’s called Autumn Elevenses! No, I didn’t invent the name to make it impossibly cute. It’s from Mrs Appleby’s Traditional Yorkshire Recipes, 1982. It’s one of those dishes I knew I had to make the moment I saw the name.)

Print Recipe
Autumn Elevenses
This super straightforward pasty is a comforting treat when you're kicking through the leaves or hiding out inside. 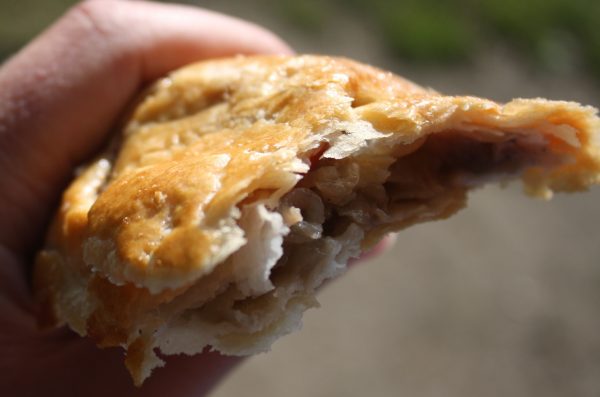